Product Testing by the Sanidumps.com Team

Product Review - Upgrading Charger and Inverter Setup in my RV 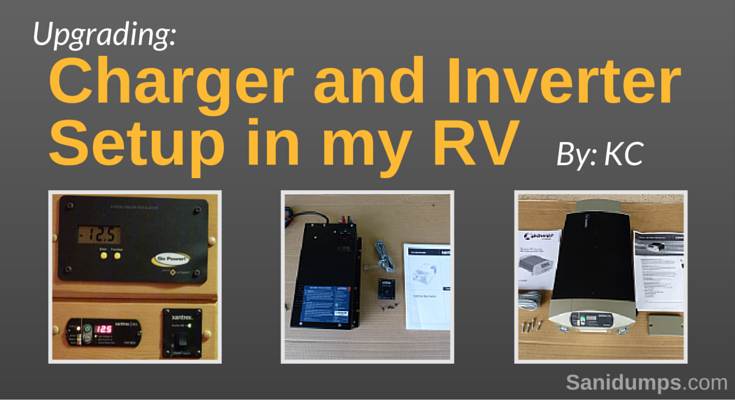 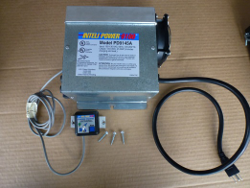 My 2007 5th Wheel came with a 400 watt modified wave inverter (not shown) and a Progressive Dynamics 9145A 45 amp multi-stage charger with wizard. This inverter is an upgrade over most fixed rate chargers that deliver a constant 13.6 volt charge. The inverter was directly wired to my audio/visual 120AC plug in the entertainment center.

Since we dry camp or boondock 80-90% of the time, we are required to run other AC devices such as the microwave, laptops and exhaust fan/light over the stove. To manage this I had installed a Xantrex XM1800Pro modified sine wave inverter to run all the other AC devices except for water heater and air conditioner. 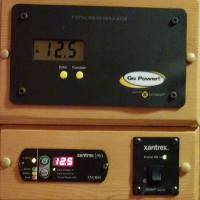 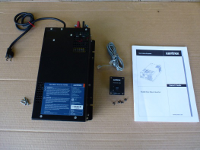 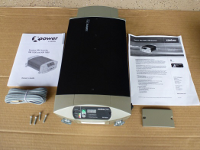 This was a cost versus benefit driven decision. There were several benefits such as: 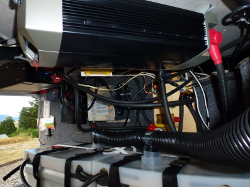 The install was fairly easy and the manuals were very good. Locating all the units was a little challenge due to space and proximity to the batteries.

In conjunction, I also acquired an ultra-quiet Honda 2000i 2000 watt generator/inverter to charge my batteries. This setup had following drawbacks:

Since we RV anywhere from 11 to 18 weeks a year, taking multiple trips, this became an issue we needed to resolve.

After researching several inverters, chargers and combo units with a variety of specs, we decided that an ideal solution should meet the following requirements:

In 2010, we met with Sean from the Go Power!TM team at a trade show. I mentioned our dilemma and he suggested we look into a Magnum charger/inverter/transfer switch controller with an intelligent remote as a solution. We selected the Magnum MS2812, ME-RC50 remote and BMK battery management system with a 125 amp multi-stage charger, 2800 watt true sine inverter and a built-in transfer switch. The price premium over the 2000 watt MS2012 was very little compared to additional capacity for charging and the inverter wattage. The main reason, we went with this unit, even though it was a little overkill were following: 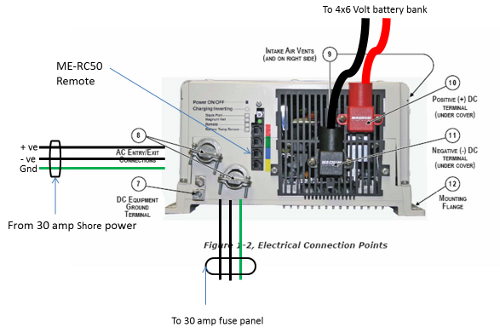 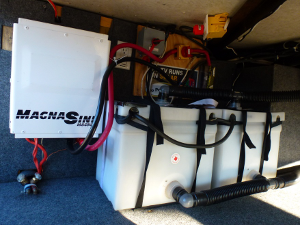 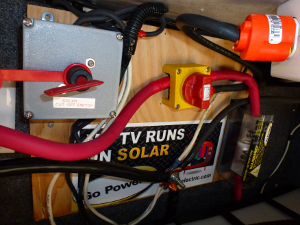 The manual and additional advice from the Go Power!TM team made the install a breeze once I figured out how to bend the #3/0 (over 1" thick) DC cables. I wired my shore power directly into the Magnum and then connected to my 30 amp fuse panel which meant I did not have to install an AC sub panel. All in all the wiring became much simpler. If you are a DIY person, make sure you include a DC slow blow fuse (200 amp) and a cut-off switch to cut all loads as well as appropriately sized DC wiring. Also I would recommend you get it checked out by a professional as these are big currents and could create fires and personal injuries. The Magnum manual is by far the best manual I have ever come across in the RV world. It covers just about all eventualities and configurations of batteries and RV wiring.

The remote panel is full of useful information about the health of your power system, the battery bank and power consumption with charging rates from solar as well as shore power. The setup accounts for most battery types and AC inputs from 15-50 amps. There are many parameters that you can set for your particular need or just use the default set up that works for most RVers. My wife likes the simplicity of the remote (easy to turn it on or off and lets you know the status of the battery bank) since it allows her to use the system with little confusion.

The install was a breeze and it took about 2 hours of planning to layout the physical space and to calculate the wiring lengths and routing and an additional four hours doing the actual wiring. The confined space (sitting in the basement to wire and bend the #3/0 cables) was the biggest challenge. The manual outlines the setup and testing of the unit in nice easy steps. You can customize the setup as much or as little as you want. I would highly recommend you spend the extra dollars for the ME-RC50 remote as it makes setup and usage much more user friendly. The combination of 225 watt solar, 4 x 6 volt battery bank, Magnum MS2812 and ME-RC50 remote is a perfect setup for us and our lifestyle when we go RVing.

Remember, you can transfer all this equipment to your next RV if you do decide to upgrade. All you have to do is keep the factory supplied charger and leave the solar panel clamps mounted on the roof (so that you don't break the seal on the rubber roof; the clamps are easy to replace). Given the robustness of these products and the long warranties, this is one investment that will enhance your RVing experience for a long time.

Now I have to find good homes for my Xantrex Inverters.